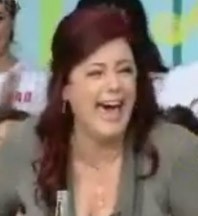 Rania Issa Dagher became mostly known because of her repetitive appearances as a guest on the TV show LOL, hosted by Hisham Haddad and Arze Chidiac on Orange Television - OTV.

As a comedian, Rania Issa Dagher is mostly "specialized" in Homophobic jokes about "Foufou" , through which she happily expresses her disdain towards the LGBT community, to the hosts delight. Ironically, many of the guests received on the show happen to be gay, as explained by an angered activist.

Help us improve this page:   Correct or update the Rania Issa Dagher page