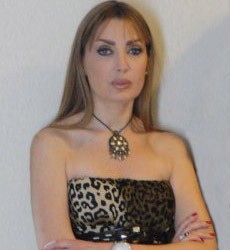 As of 2011, Randa Sarkis presents a live game show on Heya TV- Arab Woman's Channel, called Inta W-hazzak. She has been on the “Kanat El Maraaa El Arabia” since 2008.
Between 2006 – 2008, she used to work on Ouyoun TV, where she hosted live game shows, and received guests.


As a radio anchor, Randa first started working in 2004 on “the Voice of Liberty” FM station. Four years later she moved the Morning Show on the liban star- sawt al 5aleeg Radio.

She also appeared in the series "Imraa Min Dayaa", "Dounia Heik", as well as in the theatrical play “Anis W Maurice”.

In June 2011, Randa Sarkis appeared in a TV commercial for Concord home appliances. The ad was in the same spirit as an earlier commercial the company did in the late 90s-early 2000s featuring Miriam Clink.

Help us improve this page:   Correct or update the Randa Sarkis page