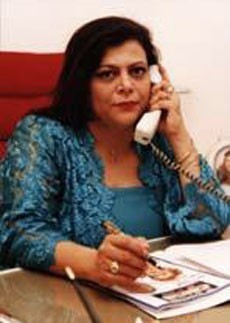 Randa El Murr started her famous show back in the early 90s on Radio Rama which she owned and operated. She is the sister of Radio Anchor Hala El Murr who was popular for her show on Radio Jabal Loubnan Arabic RML Liban.

The Lebanese Goverment in the 1997 came with new rules for communication and media and closed down most of the FM stations which operated in Lebanon including Randa El Murr Radio, Radio Rama.

Randa El Murr voice appeared one more time in the early years of the 2000 on Sawt El Mousika Entertainment Radio.

Randa El Murr definitely beats her male colleagues in the Radio Business. Randa is reputed for her sweet provocation and her cunning mockery, Randa was also seen as the radio presenter with the most loyal listeners. Although her show (Abyiad w Aswad) is not a political one, Randa’s strong yet subtle patriotic sense made her one of the Most Powerful Lebanese Woman 2006

Randa El Murr presents Abyad w Aswad, a live radio program which focuses on the latest productions in Music industries in Lebanon and the Middle East. The show aims to encourage every distinguished new production and compliment the individuals responsible for it.

Help us improve this page:   Correct or update the Randa El Murr page