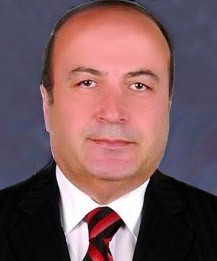 Rafik Nasrallah is a journalist and Mass Media Expert from Lebanon.


Rafik Nassrallah, also written Rafic Nassrallah or Rafiq Nassrallah, began his career in journalism in the early 80’s with the Murabitun radio Voice of Arab Lebanon during the civil war, and later became bureau chief for Abu Dhabi TV. Rafik was actually the very first Arab reporter to transmit his message live on TV by satellite (while under the employ of Abu Dhabi TV).


Rafik understands extensively the way media works, and how this ‘weapon’ is used by superpowers for their own benefit. He is a regular guest of political talk shows on most Lebanese and Arab TV channels, through which he steers controversy and sets fire to tough debates.

Rafik Nassrallah is also a known partisan of resistance movements in the world and Lebanon in particular.


He often warns from the destructive effects of a secret media black-room (ghorfa sawda serriyeh), which distributes standardized messages, intended to influence public opinion. Commenting on how affluent such rooms are, and how frivolous public opinion is, Rafik narrates the following anecdote:

While dining out in the mid 90s, a close by journalist was publicly insulting late P.M. Rafic Hariri in front of other guests. The insistent man did not halt until Rafik Nassrallah’s dish platter came flying towards him hitting him in the forehead. The wound left a scar, still visible to this day. That same journalist, now with the memorable scar, then miraculously becomes his number one defender in the 14 March political denomination!


Rafik Nassrallah has recently released a book entitled ‘Security of the Arab Media, a problematic role and identity’, published by Dar Al-Riyadh Al-Rayes Beirut. In it, Rafik focuses on the experience of Arab media (visual ,radio broadcast, and prints) during the past ten years. He states how starting from 1995, a clear structural crack was made in the Arab media, that lead to the dissemination of a new language replacing previous constant concepts and axioms. Some TV stations gradually exceeded all norms and were unabashed in hosting Israelis.


Some of Rafik Nassrallah’s most notorious views :

Freedom of speech is a lie. Djibouti is no different than the USA in that regard. (Refer to CNN fires Octavia Nasr)

Impartiality is also an illusion. Deep down, everyone has an opinion that infiltrates into reports, one way or another.

The Arab Media of 1982, although lacking in technical advancements, is far better than what is currently being produced.

The western media, along with its Arabic extensions, is demonizing Iran in order to take the focus away from the more important issue of Palestine. The Arabic Media is either compliant, or at best impotent in that regard. The Sunni-Shiite conflict is one of the tactics currently being used.

There is a special media infrastructure that is secretly distributing anti-resistance material, news headlines and reports. They distribute an effective standardized message. Notice the headlines how they all go in a specific direction to convey one same message.

There is no such thing as Public Opinion. This is a big joke, as people are mostly the product of mass brainwash campaigns of misinformation!

Hassan Nasrallah is the best spokesperson in the Arab world, and a master media expert.

Treason has become a point of view.

In 2006, some Arab regimes were partners in the aggression against Lebanon. They sponsored part of the media campaigns that targeted the resistance. They also bribed and corrupted many journalists, newspapers and televisions.

In the next coming months (July-August-September 2010) a large scale operation against Lebanon (currently being prepared) will take effect.
Help us improve this page:   Correct or update the Rafik Nasrallah page