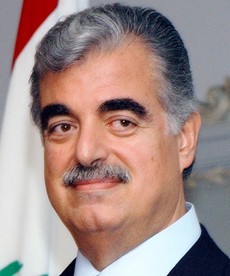 Rafic Hariri was born on the 1st of November 1944, He was assassinated on the 14th of February 2005 near the area of Ain El Mraiseh.

Rafic Hariri was the Lebanese Prime Minister during two different occasions, First from the years 1992 until 1998 and another time from the year 2000 until the 20th of October 2004, when he resigned.

Hariri born in Saida and educated in Saida, moved to work as a teacher and a businessman in Saudi Arabia.


In the year 1965, Rafic Hariri moved to Saudi Arabia, and worked as a schoolteacher and an accountant.

Rafic Hariri was able to make a big fortune and in the early nineties founded the Hariri Foundation which helped thousands of students by providing financial aid to smart students who could not afford the high tuition of good universities such as The American University of Beirut - AUB.

In the year 1992, and following the Lebanese War, the people had their hopes on a person who would save the country and help build its economy.

Rafic Hariri with his political power and business mind helped in creating the Downtown of beirut, restructuring and building the heart of what once was the biggest cities in the middle east.

But a 15-year civil war, and a lot of corruption which followed the war, raised the public debt from $2.5 billion to over $40 billion. This resulted in the economic growth slowing from 8% to -1% during the time Rafic Hariri was a prime minister.

All these circumstances led him to resign under public demand in October 2004. Few month later, he was assassinated by a car bomb which killed him and several others.

Rafic Hariri was first married to Nida Bustani, they had two sons; Bahaa Hariri, Hussam Hariri who died in a car accident in 1990, and Saad Hariri who entered the political life after the death of his father, he took the leadership of the Future movement and became a Prime Minister in the following years.

An international investigation is still underway to-date seeking the truth about who killed Rafic Hariri in the year 2005.

Help us improve this page:   Correct or update the Rafic Hariri page