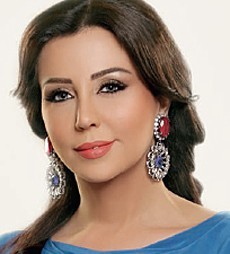 Rabia Zayat (aka Rabia Zayyat) used to be a presenter on NBN television, where she hosted Sijal Show. It discussed different social issues and searched for answers and solutions inviting experts in various fields of life. She later moved to Al Jadeed TV where she attempted a short lived career as a news anchor. Unfortunately she didn't find herself in that position and agreed with her employer after the first few trials to move back to what she has always done and felt good about...

Rabia Zayat is the wife of Zahi Wehbi the famous poet and TV host.

Rabia Zayat participated in all the Lebanon Protests of 2011.

Coming from the south of Lebanon, a region that had suffered from Israeli occupation, Rabia is very patriotic and nationalistic. In an incident on her show in 2011, a right-wing figure May Chediac retreated from one of her episodes because she had asked her questions about the resistance. May was upset by Rabia's questions which she described as aggressive including: "When will you bring back the old May that laughs, instead of the new May who is the Living Martyr?" "Was the purpose of your tour in America to incite the American public opinion against Hezbollah and Syria?" and "If Elissa were not from the same political team you support, would your opinion of her be any different?"

Rabia's show proved to be so popular it reportedly affected the ratings of other competing shows such as Mona Abou Hamzeh's Talk of the Town on Murr Television - MTV Lebanon. No proof or reliable statistics have however been brought forward for support; Mona's show was apparently already losing viewers, and it became worse with the arrival of additional competitors such as the program of Rima Karake on Future TV. Peri Cochin (who works at MTV), the copyright owner of a French show (Dîner d'Ardisson) similar to that of Rabia, filed a lawsuit and forced Al Jadeed to change the concept of Rabia's show. Many felt that this incident was ironic, given that MTV also has many shows directly ripped-off from the competition such as the reproduction of LOL from Orange Television - OTV.
Rabia did not quit and saw in this a clear challenge by some who couldn't tolerate the competition. Her show went on with a few changes, and it became even more popular because of this conflict! The new show called "We are still at Rabia's" (Ba3dna 3ind Rabi3a), also fought back by inviting A-list stars on the show such as Hayfa Wehbeh.


Help us improve this page:   Correct or update the Rabia Zayat page