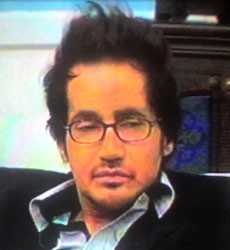 Patrick Mbarak took role in many Lebanese Television series since the late nineties.

He took role in the 1993 TV series Al Zaman Wal Doulab, In 1996 he acted in the Television series Banat Wa Shabab.

He continues thoughout the 2000 to give great work by acting in the following TV dramas; Al Fajer, Wa Yazool El Khatar, Sowar Daeia and Gharibeh.

Help us improve this page:   Correct or update the Patrick Mbarak page