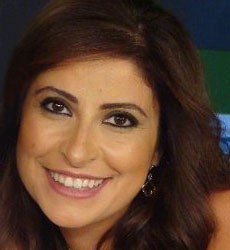 Pascale Chemaly was born and raised in Lebanon.

She became famous after working with Orange Television - OTV, as one of the presenters of their morning show Yawm Jdid.

Pascale Chemaly hosts the show along side other television personalities such as Mireille Hakim, Elie Hawchan and May Sahab.

Help us improve this page:   Correct or update the Pascale Chemaly page