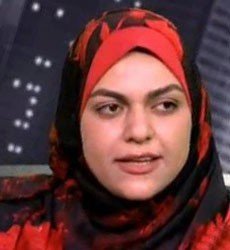 Nawara Negm is an Egyptian activist, journalist, and blogger.

Nawara Negm (aka Nawara Nagem or Nawara Najem) is a spokesperson of the 'real' opposition in Egypt, and not those who just rode the wave in the very last minute, and those who would leave whenever it got tough.

Nawara Negm was actively present in Tahrir Square Cairo January-February 2011, along with the rebellious youth standing up against Hosni Mubarak's dictatorship. She witnessed most of the twists, including police brutality and the "Baltajiya" phenomenon (hired x-cons that brutalize civilians) topped with molotov cocktail attacks, all of which attempted to terrorize the protesters and put a stop to the legitimate peaceful manifestations.

Nawara Negm proved very valuable in reporting to the media her observations, including Al Jazeera TV.

After Mubarak's second speech, in which he reiterated he was not leaving power, Nawara Negm promised she would bring him to justice for the crimes he has committed and the innocent blood that was spilled. The opposition's demands changed from Mubarak must leave, to Mubarak must be judged. She also accused his regime of being behind all the fabricated Coptic-Muslim tensions and explosions, which she explained are a way to undermine any popular revolutions and to tear down the social and religious fabric of the country. She added that Mubarak is punishing the people of Egypt for daring to ask for their rights, but that he will not get away with it.

Nawara Negm graduated from Ain Shams Faculty of Arts - English Department. To note that she is no other than the daughter of the leftist poet Ahmed Fouad Negm and Islamist thinker and journalist Safinaz Kazem.

Help us improve this page:   Correct or update the Nawara Negm page