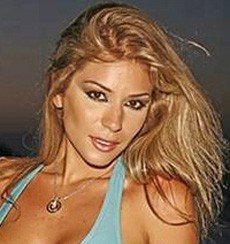 She started her modeling career in Nidal Bcherrawi Agency.
On the 13th of October 2007, Nancy Afiouni won the title of Miss Intercontinental 2007 beauty pageant, which was held on Mahe Island.

Nancy has a hoard of fans obsessing about her hot legs, and many fetishist fan clubs dedicated to Ms. Afiouni's legs have popped up all over the net!

Recently in 2010, the sexy Nancy Afiouni starred in the music video for Te3bou A3sabi, a new song by Naji Osta . In the clip, Nancy is a sensual dentist that seduces and enchants her clients; That is, when she is not soaking up the sun with her friends in bikini on the beach. Nancy also ranked 23rd in Top 100 Sexiest Arab Women 2010.

In 2011, Nancy Afiouny debuted as an actress next to Nadine Njeim in Sorry Mom Lebanese Thriller Movie. Some critics were however not very impressed with her acting.

In December of the same year, Nancy released a music video for a dance song in English called My Meow, her first attempt as a professional singer....


Help us improve this page:   Correct or update the Nancy Afiouni page