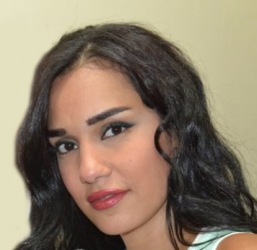 Nana Ghaziri is a Lebanese Astrologer and Predictor. She presents the TV program Asrar rouhaniyat on Murex Television.

She studied Fashion Design at the American University of Beirut - AUB.

She is known to move her hand over a persons face and body, detecting health problems.

Some of her predictions for the year 2014 for Lebanon and the World include:
_ Michel Aoun will become the President of the Lebanese Republic.
_ Television station faces a scandal causing a confusion and leading it a shutdown.
_ A political assassination attempt in the making.
_ A known Lebanese artist will retire because of an illness.
_ An explosion happens near a mosque.
_ Beirut airport terrorist attack.
_ The price of lands and real estate will be lowered as a result of the collapse of the economy.
_ A Strong earthquake happens in Israel and can be felt in Lebanon.
_ An Internet satellite problem causes disruptions of Internet access world wide.
_ 2014 the year of natural disasters and wars, causing famine around the world.
_ 2014 the emergence of infectious diseases.
_ A Plane crashes into the sea because of the weather, deeming it as a terrorist act.
_ The situation in Syria remains the same.
_ Syria's Bashar al-Assad has exposure to the assassination of his close associates, and if it is not assassination remains in power. a nuclear war in Iran.
_ A sudden drop to the price of the U.S. dollar.
_ UFO sightings Middle East, and news related to the existence of Aliens will be revealed across the world.

Help us improve this page:   Correct or update the Nana Ghaziri page