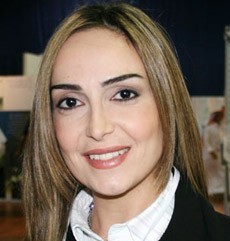 Nadine Hani also known as Nadine Hani is an television anchor who works for Al Arabiya News Channel which is based in Dubai.

Nadine joined Al Arabiya in 2005, after moving from CNBC Arabiya in Dubai, another specialized financial channel, where she worked as a business news anchor, in addition to hosting her own personal finance program.

Al Hani started her career in media along side her finance related career when she started presenting a daily summary of business news on Murr Television - MTV Lebanon.

Nadine Hani holds a Masters degree in Business Administration from the American University of Beirut. She was also A Procter & Gamble scholarship winner.

Help us improve this page:   Correct or update the Nadine Hani page