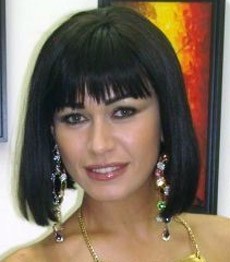 Nadine Rassi also known as Nadine El Rassi was originally a model and the face of Noun Magazine for women. She later took roles in many television series and movies.

Maitre Nada a comedy on LBC 2009 in which Nadine took the role of Maitre Nada.

Kalam Neswan a series for Ramadan 2009 on MBC.

Aasr El Harim a series on LBC 2009 in which she took the role of Principal role of Leila with Antoine Kerbaj and Elsi Ferneini.

In 2009 Nadine took the main role in the 2008 Thriller movie Khallik Ma3ealong opposite Ammar Chalak.

Nadine has been acting since the early years of 2000, she appeared in many television series and plays, her name was attached to the following names

In addition to acting and in the beginning for her career, Nadine El Rassi took role in major advertisments for the following brand names:
Galaxy chocolate, Fantasia chips, Pantene Shampoo, Head and Shoulders Shampoo, Noun Magazine and more.

Help us improve this page:   Correct or update the Nadine Al Rassi page