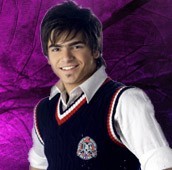 Moustapha Mezher lived in Riyadh (Saudi Arabia) with his parents. He came back later to Lebanon to study at the American University of Beirut. Moustapha Mezher has a strong personality, he lives with his sister and they both enjoy singing.

Moustapha Mezher sings in english and arabic. he dreams of becoming a singer since he was a child. He loves to live in Lebanon.

Help us improve this page:   Correct or update the Moustapha Mezher page