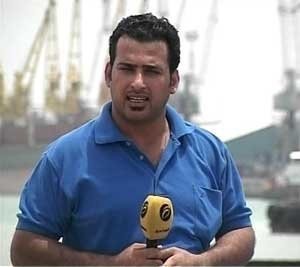 Montazer Al Zaidi, also known as Montaser El Zaydi or Muntadhar al-Zaidi is a journalist who works for Al Baghdadi an Iraqi television channel. Montazer became a celebrity overnight after he threw his shoe at the President of United States of America, George W. Bush during a press conference held in baghdad on the 14th of December 2008.

Montazer Al Zaidi was born in 1981, he graduated from the School of Information at the University of Baghdad. Montazer began working with Al Baghdadi satellite television channel in 2005, the tv channel is headquartered in Cairo, Egypt.

He is a balanced and calm person said one of his colleagues, who preferred not to reveal his identity.

His colleague emphasized that Montazer, who got arrested, "rejects the occupation and decent as any Iraqi has the right to express it in a manner that creates timely."

Some of his other colleagues say that Montazer Al Zaidi hates U.S. troops because they caused the death of two of his brothers who belonged to the Al Mahdi Army, loyal to radical Shiite cleric Muqtada al Sadr and who has faced fierce fighting in the Iraqi army and the U.S.

"This is the farewell kiss, dog," screamed Al Zaidi at Bush as he was throwing his two shoes.

In the Arab world, simply showing the sole of the shoe, "Gazma," as they call in Egypt, is considered an insult, even worse than calling someone "dog", an animal Muslims regard as "unclean".

This is not the first time that the name of Zaidi jumps to the media since the Nov. 16, 2007 was kidnapped by a group of armed men in Baghdad while on his way from his home in the mostly Shiite neighborhood of the Sadr City in eastern Baghdad, his work in the neighborhood of Al Waziriya, in the north of the capital.

A similar action occured back on the 10th of May 2006, when a Georgian citizen, Vladimir Arutiunián, launched a hand grenade at Bush which failed to explode. Vladimir Arutiunián was arrested at once and sentenced to life imprisonment.

Montazer Al Zaidi got interrogated by the security services of the prime minister of Iraq and formal charge against him are one the way. On the other hand already Montazer Al Zaidi is considered by many Iraqis as a national hero.

Help us improve this page:   Correct or update the Montazer Al Zaidi page