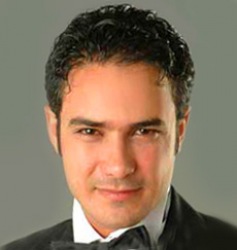 Mohamed Ragab is an Egyptian actor who was born in Cairo on the 27th of May.

Mohamed Ragab dream was to become a police officer, so he joined the Military High-school of Giza.

He was gifted as an artist and he produced beautiful sculptures, so his family expected him to join the Faculty of Fine Arts. On the contrary, Mohamed Ragab joined the Faculty of Information and later found his way into the film and TV industry.

His first role as a supporting artist was in the movie Al Masir (The Destiny) by Youssef Chahine.
He also took role in the movie Omar 2000 and Malaki Eskandariya. It was only until the year 2008 that he got his first leading role in the movie 1/8 Destat Ashrar opposite Nicole Saba. The film was a big hit and featured big names such as Yasmeen Abdel Aziz and Khalid Saleh. The story was written by Khalid Galal and directed by Ramy Imam.

Following his success as a lead actor, he took similar leading roles in movies such as Klashinkof, El Mosh Mohandis Hassan and Mohtaram Ella Roe.

In Television, Mohamed appeared in the TV series: Al-Banat and Likaa Ala El Hawa.

Help us improve this page:   Correct or update the Mohamed Ragab page