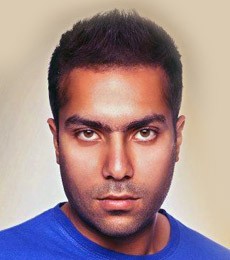 Mohamed Effat is an Egyptian singer who became mostly famous in 2011. His debut album entitled "Ayami Elli Gayya" was released in October 2011, it was produced by Solo Records.

Mohamed Effat voice and singing style resembles to an extent that of Amr Diab. To be precise his voice is somehow between Diab and Amr Mostafa, the famous Egyptian composer and singer.

We expect to see this new star on higher grounds in the upcoming few years. If you are big fans of both Diab and Mostafa then you can surely add this new artist to your favorites.

Effat's debut album contained twelve songs, a great collection of both dance and slow love ballads. "Baheb Hayati" is a perfect example of a soft love song which touches your heart and soul.

Earlier to releasing his debut album, Effat released 2 songs ( including the hit single - Asheq ) in a combined album with Egyptian singers Ahmed Ezzat, Alya and Salah. The album was released in August 2011 under the name The ONE music production.

Help us improve this page:   Correct or update the Mohamed Effat page