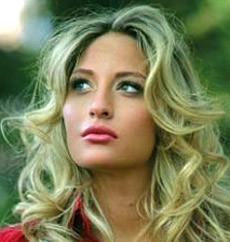 Mirva Qadi was born in cannes on the 8th of September 1986. She is the eldest of her two brothers. Her Father Walid Al Kadi is from north, Lebanon and her mother Carole Castanio is from Nice, a city in France.

Mirva began modeling at the age of 14 and was elected as Model of the Year in the year 2001. She pursued the modeling career till the year 2007.

Afterwards she began studying Audio-Visual Arts at the American University of Technology and while performing a few singing classes she found her passion and decided to make it a profession. She took regular classes in vocalizing and practiced the piano.

She released her first single at the age of twenty it was called Khatak Mashghoul. And in the month of December 2008, Mirva Kadi released another song called Kol Dakika that was directed by famous clip director Caroline Labaki, and written by Haitham Shaaban. The song was composed by Haitham Zayad and arranged by Tony Saba.

Help us improve this page:   Correct or update the Mirva Kadi page