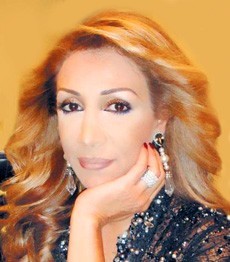 Mireille Mazraani is a famous Lebanese television personality. She has been working in the media field since 1990. Her journey on Television started with the late Riad Sharara who had been credited for her fame and success. They both were a wonderful duo on Television who made history in TV Game-shows which were first introduced by famous director Simon Asmar and aired on the airwaves of the Lebanese Broadcasting Corporation - LBC.

After the death of Riyad, Mireille Mazraani started working solo. She presented few Gameshows on LBC and later moved to work at Murr Television - MTV Lebanon until it was closed down in the 2000.

Mireille Mazraani disappeared from the TV scene for few years then came back to host game shows on MTV, such as the famous program, Ahdam Shi which was launched in February 2010. The program is similar in concept to the LOL TV program which airs on the rival television station Orange Television - OTV.

Mireille Mazraani is a mother to a daughter named Magida who is majoring in Radio and Television.

Help us improve this page:   Correct or update the Mireille Mazraani page