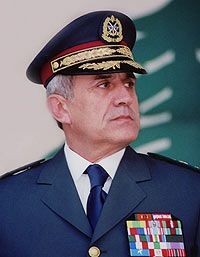 General Michel Sleiman took command of the Lebanese Armed Forces on December 21st 1998. He was born on November 21st 1948 in the town of Amchit - Caza of Jbeil.

Michel Sulieman was born on the 21st of November 1948 in Lebanon.

He graduated from the Military Academy as 2nd Lieutenant 1970. General Sleiman holds a Bachelor of Arts in Politic and Administrative Sciences from the Lebanese University. He also masters English and French languages.
During his military service, he progressed from an infantry Platoon Leader to a Battalion Commander, and then assumed the position of a trainer in the Military Academy and in the Non Commissioned Officers’ School. From December 4th 1990 until August 24th 1991 he was appointed as the Chief of the Intelligence Branch of Mount Lebanon. On August 25th 1991 he was reassigned to the post of the Army Staff Secretary-General until June 10th 1993. Then, he became the Commander of the 11th infantry brigade from June 6th 1993 until January 15th 1996, a period that witnessed violent confrontations with Israeli enemy on the front side of the regions of West Bekaa and South Lebanon. On January 15th 1996 he was appointed as Commander of the 6th infantry brigade and remained in this post until December 21st 1998 when he was nominated as the Armed Forces Commander.

Has won the following decorations, medals, awards and honors:

Has attended to the following military training courses:


Married to Mrs. Wafaa Sleiman and has three children.

The principal stages of his Command period:

Fighting terrorism and extremism, notably through the following operations:
Discovering Israeli spying and terrorist networks, most lately the network discovered during the “dawn surprise” operation carried out on June 6th 2006.

Discovering and fighting terrorist organizations in the high and barren mountains of North Lebanon in 2000, eliminating most of their members, dismantling their cells in all Lebanese regions and arresting their members.

Attacking the organization of “Fateh El Islam” in the camp of Nahr El Bared on 20/5/2007 in retaliation for the act of treachery launched against the Lebanese Army posts in the perimeter of the camp and in some other locations. The structure of this terrorist organization inside and outside the camp was destroyed the thing that led to an unprecedented popular support to the role of the army and for the first time in the history of Lebanon as the protector of the national unity.

Restructuring the Lebanese Army after the amendment of the military service law.

Dedicating the Army to protect democracy and not as to be the Army of the Authority repressing its political opponents, but rather an Army that preserves the security of the citizen and his rights. The Army clearly assumed its national role of maintaining the security of the protestors, public and private institutions and liberty of expression all through the year 2005 following the assassination of the Prime Minister Rafic Hariri and during the year 2006 till now.

Offering a plan to end the Israeli war on Lebanon which happened in 12/7/2006. As a honorable solution for all parties. This plan includes the planning and the preparation for the deployment of Lebanese Army in the south and on the land and sea crossover, this operation carried out accurately and devotionally and at the conclusion of the operation on the second of October, the Lebanese flag was hoisted on the hill of Labbouni adjacent to the southern border indicating the return of the Lebanese sovereignty to the south.

Help us improve this page:   Correct or update the Michel Sleiman page