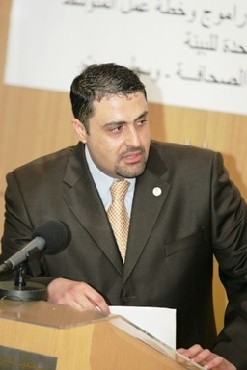 Mazen ABBOUD was born in Douma, a Northern Town in the Lebanon, in 1972. He graduated from the American University of Beirut (AUB) in 1996 as an Agro-Economist.

He began his career by working for FAO as a technical Assistant on the National Census Project, in 1996. Then was hired in 1999 a national consultant on World Bank Irrigation Projects till 2001.

In 2000, he established Entegro.SARL, an Engineering consultancy Firm. And also began founding the Union of Northern Associations for Development, Patrimony & Environment (UNADEP), and the Umbrella Association of some 16 Northern NGOs that appeared in 2002.

In 2004, he was nominated by the Council of Ministers a full member of Committee of the Lebanese Tobacco Board.

Moreover, in 2005 Mr. ABBOUD was nominated also by the contracting parties to the Barcelona Convention of the Mediterranean Action Plan-United Nations Environment Program (UNEP-MAP), as an Alternate Member of Mediterranean Commission on Sustainable Development (MCSD) & an Environmental Consultant to MAP.

Help us improve this page:   Correct or update the Mazen Abboud page