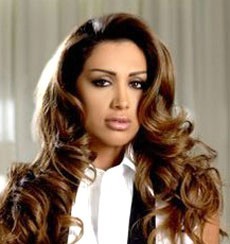 Maya Diab is a beautiful singer and celebrity from Lebanon.

Maya Diab is a former member of The 4 Cats. She was close friends with musician Ghassan Rahbani, creator and manager of the group. She also has strong ties with television presenter Toni Baroud.

Maya Diab is married to a rich business man, after a long love relationship. Their marriage was held in Switzerland.

The charming Maya Diab is also known for her sharp sense of humor, and masters the art of joke telling. She is often the guest of TV shows that showcase funny celebrities, such a the program LOL that runs on OTV.


Help us improve this page:   Correct or update the Maya Diab page