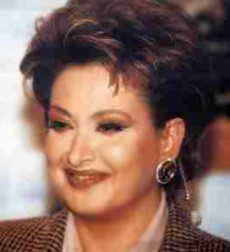 May Matta is a famous Lebanese television presenter.

May Matta started as a news presenter at the Lebanese Broadcasting Corporation - LBC. She was famous for presenting the Program Sarit El Saa Tmaneh (it is 8 o'clock).

And for many years which followed, May Matta presented the Morning show Nharkom Said, and later focused on the program Agenda which aired on LBC.

May is married to Rachid Matta, the couple has a son.

May Matta has worked in television for more than twenty five years.

Help us improve this page:   Correct or update the May Matta page