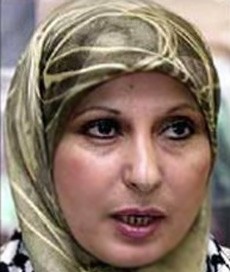 May Khansa also known as May Al Khansa or Mai El Khansa is the President of the Beirut-based International Coalition against Impunity HOKOK.

May Khansa accused Israel of intimidating the International Criminal Court (ICC), denouncing the court’s inexplicable delays and the slow pace in handling its Gaza war crimes case. El Khansa had organized an impeccable file that included a 200-page legal study as well as several documents illustrating the terrorism of the Zionist entity and its accomplices, namely Britain and the US.

It showcased strong incriminating evidence, including photos and CDs, which proves that Israeli leaders and soldiers were involved in committing crimes against humanity, war crimes and genocide in Gaza during their December 2008-January 2009 military onslaught in Gaza.

May el Khansa has been on our list of Most Powerful Lebanese Women for 3 years in a row now, and keeps surprising us with her inexhaustible aspirations.

May Khansa had also previously worked on bringing those behind the Sabra and Shatila camp massacre to justice. Her most unusual case to date still remains however her law suit against the US Chargé d''Affaires Michele Sison (ambassador). Al Khansa has received numerous death threats, but remains dedicated to her legal pledge and determined to bring Israel to justice.

Help us improve this page:   Correct or update the May Khansa page