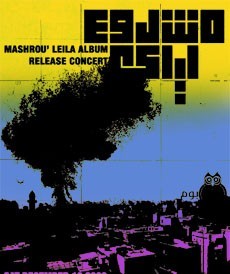 The band is very experimental and often describes itself a perpetual project, thus the name which translates into “overnight project”; Leila also doubles as a typical name traditionally used in Arabic literature to convey a beautiful and exotic female character. In this case, Leila becomes a clear embodiment of their native city Beirut and its urban lifestyle. Therefore, Mashrou3 Leila is also a “project of one night” in the company of an enchanting Leila!?

It is actually hard to describe Mashrou3 Leila’s music genre, as they are a fusion of many things from acoustic rock, to oriental acid jazz and Arabic soul/Tarab, bearing traces of Armenian music, Jewish folk and Spanish influences. The group sometimes edges a gypsy swing style, and could be labeled as World Music (if you must)... but mainstream, they are not! Their lyrics, mostly in Lebanese slang, also offer an interesting sociopolitical critique, not without a few swearing and sexual references here and there.

Mashrou3 Leila went from an underground experimental project in 2008, developing into a trend embraced by the Beiruti youth, and is fast becoming quite popular among a much wider audience. They have performed around Lebanon since 2008, playing in various venues in Beirut or at outdoors music festivals. In 2010, they were invited to perform at a more prestigious event, the Byblos International Festival (July the 9th).

Mashrou3 Leila’s image is that of a cool hippie bunch, fooling around with all sorts of experimental sounds and lyrics to bring to the audience a fresh taste from the underground alternative music scene of Beirut. Although the lead singer doesn’t lack in charisma, the girls mostly have a crush on the cute drummer Carl Gerges. Mashrou3 Leila so far has two official music videos in its portfolio, Fasateen (directed by Diane Farah and Jowe Harfouche) and Raksit Leila (by YeloStudio, directed by Jad Sarout, Chadi Aoun and Yasmine Sarout).

Help us improve this page:   Correct or update the Mashrou3 Leila page