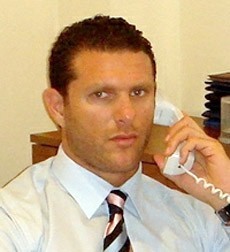 Marwan Kayrouz is a Lebanese World Champion in Kickboxing.

Marwan Kayrouz studied Business Administration at Notre Dame University, and got his Bachelor Degree in 1998,then an MBA from Belford University in 2000. He is the Senior Business Development Manager at Impregilo. He also worked as a Business Development Manager at Arabian Bemco Contracting Co.Ltd. and is also the Chairman and Managing Director at Etoile Suites Hotel. Marwan worked in his father's steel construction business where he learned the basics of the contracting business.


Marwan opened the First Harley Owners Group Cafe in Jounieh with his fellow Harley Davidson riders, and than moved forward in the Pub and restaurants business, opening night clubs and restaurants from Kaslik to Acharfieh. He is the first developer of a boutique-Hotel in Down Town Beirut central district, the Famous Etoile Suites Hotel.

In 1996, Marven Kayruz was the first Lebanese to participate in the World Muay Thai Championship held in Bangkok Thailand.

In 2009, he took part in the Arabic version of Gladiators on LBC, called “Gladiators- the Heroes”. Kayrouz was one of the 14 Gladiators and was nicknamed the Grendizer.

Marven Kayruz is married to the beautiful Carol Hannoun Keyrouz.

In the mid 90s, Marwan's name got caught up in an controversial home-made movie, involving his then girlfriend Nicole Ballan. The film was leaked to the public and lead to judicial charges based on what was referred to as a violation of public decency. Today, this sort of thing has become part of everyday life...

Help us improve this page:   Correct or update the Marwan Kayrouz page