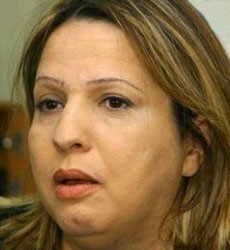 Mariam al-Bassam (or el Bassam) began her media career in the news department of Voice of the People radio station in 1990 (Sawt el Sha3b), where she later became chief editor in 2000.

Mariam al-Bassam also worked in print journalism for the Arabic department at Beirut’s Reuters News Agency office, and as a BBC reporter for five years before moving to television broadcast news in 2001.

Mariam al-Bassam is known for her independent and Arab-nationalistic views, and has been known to work toward a society without corruption, in which there is meaningful gender equity. She was the first journalist to meet Hassan Nasrallah, the leader of Hizbollah, right after the end of the Israeli war operations in Lebanon in summer 2006.

The Publication Court issued a verdict back in 2009 in a case presented by the Head of the Shura Council Judge Shukri Sader against Ghada Eid and Chief News editor Mariam al-Bassam for slander in the “Al-Fasad” television show. The verdict stated that Eid and Mariam are to be imprisoned for three months and fined 30 million LL. Mariam often faces legal litigations, and was once taken in for interrogation right from the hospital, shortly after giving birth to a new baby born.

Mariam al-Bassam has won many awards for highlighting political and social issues in the region. In 2010, she served as a jury member at Aljazeera’s International Documentary Film Fesitval.

A controversial incident occurred in Qatar in May 2011, when Mariam al-Bassam was attending a festival honoring journalists and Arab media. Upon receiving an award, she dedicated it to Ghassan Bin Jiddo, referring to his resignation from Al Jazeera TV. This angered so much the organizers and some of the guests, that she went straight up to her hotel room to wait for her flight back home.

Help us improve this page:   Correct or update the Mariam al-Bassam page