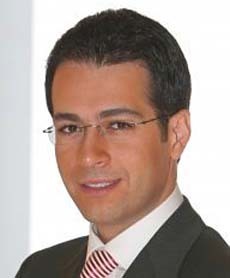 Maktabi used to work with the Kalem El Nass team, a famous talk show presented by Marcel Ghanem on LBC.

Malek started working with the media in Lebanon after returning from London, where he completed his Ph.D in International Affairs and Diplomacy.

Malek Maktabi got married in summer of 2009 to Nayla Toueini, the daughter of assasinated Gibran Touieni.

Help us improve this page:   Correct or update the Malek Maktabi page