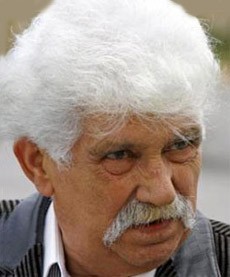 Mahmoud Mabsout is a Lebanese actor, best known for playing the role of Fehman in the Abou Saleem group and also in several Lebanese and Arabic movies.

Mahmoud Mabsout died on Monday the 25th of July 2011 in the Sheikh Ragheb Harb Hospital in Nabatiyeh, South Lebanon.

He died as a result of a heart attack while performing on stage with Abou Salim during a festival in the village of Kfarssir in South Lebanon. He was singing his famous Song (Ana Wmarti Fahimeh) when he got the heart attack. Mahmoud was rushed to the hospital, however could not be saved and died the next day.

Mahmoud Mabsout had taken role in many movies since the late sixties. Some of his movies include:

Help us improve this page:   Correct or update the Mahmoud Mabsout page