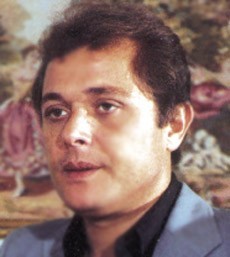 Mahmoud Abdel Aziz is a famous Egyptian actor who was born in el Wardian district in Alexandria.

Mahmoud Abdel Aziz studied Agriculture in the University of Alexandria where he obtained his BA in 1966, then later an MA in the same field. During his university years he was interested in acting and took part in some plays. Luck came his way when director Nour el Demerdash met him and decided to give him a role in the television series El Dawamah. He caught the eye of producer Ramsis Naguib who chose him for the leading role in the film "Until the End of Life" in 1975.

Mahmoud Abdel Aziz handsome looks gave him the chance to become a star. he was always cast in the role of the good looking guy.

In the year 1982, Mahmoud Abdel Aziz moved to a different genre with a movie called Shame which brought out his unknown potential. He then attempted more challenging roles. He played the role of a father when he was still relatively young in "The Virgin and White Hair" in 1983, and "Forgery of Official Documents" in 1984.

From the eighties onwards Mahmoud Abdel Aziz turned to comedy, but with tragic undertones, showing the suffering of the underdog. He portrayed a typical Egyptian who transforms tragedy into a joke, so that life can go on. El Kitkat (1991) is a good example of this genre, where he played the role of a blind old man who lost his eyesight but not his vision.

His television series Raafat el Haggan, for which he won fame and popularity. He was cast in another TV series Mahmoud el Masri, which recounts the fortune of an Alexandrian businessman.

In the year 1996, Mahmoud Abdel Aziz received Best Actor Award from the Alexandria International Film Festival for his film The Gentleman , and from the Arab Cinema Festival in Paris for his latest film The Magician in 2002.

Help us improve this page:   Correct or update the Mahmoud Abdel Aziz page