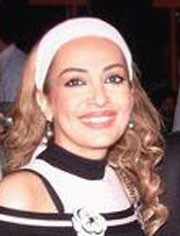 Maha Salma is a famous television anchor from the 70s and 80s.

She used to work in Talet El Khayat location, and she used to be known as Mama Maha for her children show which was the most famous kids show in television.

Maha Salma also hosted some programs and was a main figure in teleliban for many years.

Maha Salma is still active in the media community, she appears in many television shows and she gets interviewed because of her great experience and history in television.

Help us improve this page:   Correct or update the Maha Salma page