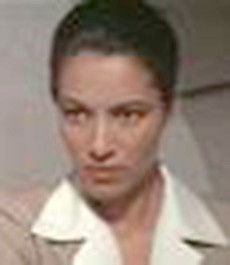 Leila Shenna is a Moroccan actress who was popular in the seventies.

In the 1968, Leila Shenna took a main role in the Remparts d'argile movie which was released in Italy first and in the United States of America in the year 1970 under the name Ramparts of Clay. The movie was directed by Jean-Louis Bertucelli.

In the year 1979, Leila Shenna became famous around the world for her role as a Bond girl in the movie Moonraker.

In the year 1982 Leila Shenna took role in the Algerian movie Vent de sable, which was directed by Lakhdar Hamina.

Leila Shenna is the cousin of the writer of Stolen Lives: Twenty Years In A Desert Jail, a famous writer named Malika Oufkir.

Her book is an account of the failed 1972 assassination attempt on King of Morocco by her father, General Mohamed Oufkir.

Help us improve this page:   Correct or update the Leila Shenna page