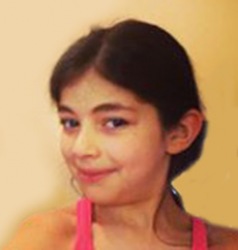 Layla Zaher is an Egyptian child actress who drew attention for her excellent acting. Layla Zaher was born on the 30th of March 2000. She is the daughter of Egyptian actor Ahmed Zaher. Layla has an elder sister named Malak Zaher who also appeared in two movies.

Layla Zaher starred along side famous actors in the Egytian comedy movie "Mohtaram Ella 1/4", a story about a bachelor and many adventures in the land of women. She also took role in the Egytian movies "Ktaketo Bony", "Captian Hima" and "Omar w Salma 2" featuring Tamer Hosny.

Layla Zaher has four Egyptian movies to date in her archive.

Help us improve this page:   Correct or update the Layla Zaher page