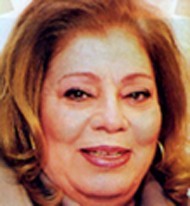 Layla Karam also known as Laila Karam or Leila Karam is a famous Lebanese Actress. Leila Karam was born in Lebanon; she died after a long battle with illness on Tuesday the 2nd of December 2008 at the Hotel Dieu Lebanon.

Layla Karam has starred in several Lebanese series and some Egyptian and Lebanese movies. She was very famous during the 70s and the 80s. Nabila Karam is the younger sister of Layla Karam, she is also an actress.

In her last appearance Layla Karam said "They remember us only after our death."

Layla Karam could not afford her treatment, she was undergoing kidney cleaning and she had problems with blood pressure.

Layla Karam started her career at the Radio Al-Sharq Al adna in 1956. She stared in Television series Abu Melhem, Al-Sarab, Al-Ghouroob, Alo-Hayati, Al Douniyah Hayk and Al Mooalima Wal Ostaz, she played the role of a school principal, her name was Sit Zarifeh which means Mrs. Sympathetic, her character on the contrary was the complete opposite.

Layla Karam also appeared in the Movie West Beirut in the year 1999.

Prior to her death, Layla Karam received some help from good people, Al Walid Bin Talal organization took care of Layla and is also taking care of Michel Tabet who was in need for a kidney transplant.

Help us improve this page:   Correct or update the Layla Karam page