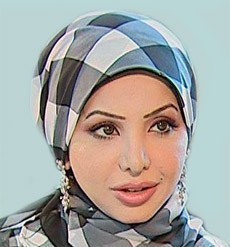 Lamees Dhaif is a Bahraini journalist and political activist.

Lamees Dhaif graduated in political science from Kuwait University and holds a Postgraduate Diploma in Forensic Sciences from the University of St. Joseph, as well as a master's degree in media legislation.

Lamees Dhaif worked in several newspapers and magazines of the Gulf Region and moved between several sections until she settled as a columnist in Alwaqt since 2005.

Lamees Dhaif is a well known controversial columnist, journalist and reporter, and became even more so in March 2009 when she was summoned to the Public Prosecutor's Office on charges brought by the Supreme Judiciary Council deputy. Dhaif had accused some members of the judiciary of corruption in a series of newspaper articles. The newspaper series, entitled, "Shameful case: The Time for Silence is Over", was part of a campaign by Dhaif calling for a family law. The articles included criticisms of the judicial authorities.

Lamees Dhaif was called in by officials on March 17, 2011, as an active member in support of the Bahrain Protests. Although she was reportedly arrested, it seems she was let go after she accepted under intimidation to quit writing. Dhaif has been silenced since the government imposed a martial law to suppress the protest movement, but in an interview with Al Jazeera TV, Lamees explained that some journalists need to remain out of jail otherwise who would defend those inside. "They can stop us from telling stories now, but they can't stop us forever".

Other activists and leaders such as Dr Ali Alekri, Abdel Wahhab Hussein, Hassan Mushaima, and Ibrahim Sharif were also detained.

Lamees Dhaif was nominated for the Arab Revolution Women Award.

Help us improve this page:   Correct or update the Lamees Dhaif page