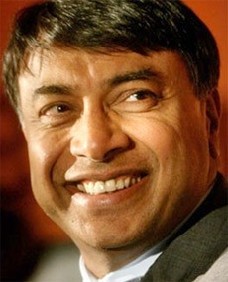 Lakshmi Mittal is an famous Indian industrialist who lives in U.K, he is considered as Britain's richest man and sometimes named the steel magnate.

His full name is Lakshmi Narayan Mittal. As of 2013, his net worth is estimated at £12.7 billion.

He was born on the 15th of June 1950 in Sadulpur a small village in the Churu district of Rajasthan in India.

Mittal is the fourth richest person in the world with a net worth of around U.S. $45 billion.

Lakshmi Mittal is a nonexecutive director of ICICI Bank, he is also the CEO of Arcelor-Mittal and the founder of Mittal company before it merged merger with Arcelor.

In March of 2013, Lakshmi is being sued at the high court for reneging on an agreement to pay fees to a former friend for helping to secure an oil deal. This cross-examination over his business practices in court could give the world a sneak peak at his business operations.

Help us improve this page:   Correct or update the Lakshmi Mittal page