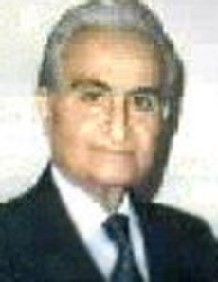 Khatchig Babikian was a lebanese politician and a member of the Lebanese Parliament between the years 1957 and 1999.

Khatchig Babikian was a Lebanese of Armenian origin, he was a philanthropist and an attorney.

Babikian studied in Lebanon, as well as France and Italy.

Khatchig spoke the Arabic, English, French and Italian languages, in addition to Armenian, Turkish and Latin.

He got a degree in Law from the Saint Joseph University in Beirut, Lebanon.

Help us improve this page:   Correct or update the Khatchig Babikian page