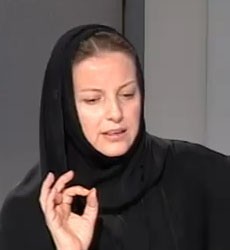 Kawthar Al Bashrawi (or Kawthar el Beshrawi) started as a radio anchor in 1984. She later started appearing in talk shows on Arab Television, where she would often defend Arab nationalism. She gradually became a TV icon after clearly supporting the Palestinian cause and the Lebanese resistance movement.

Kawthar Al Bashrawi is said to now have her own TV show on Al Jazeera Satellite Channel.She is mostly based in Lebanon, and is a regular guest on Al Manar TV.

Commenting on the Tunisian revolution, Kawthar Al-Bashrawi describes it as a miracle; a revolution of a nation, not a revolution of political parties. It had no leader, unlike other historical revolutions, including the French and Iranian etc. Despite attempts of some of the former Zine El Abidine Ben Ali dictatorship’s symbols to return to political life, still she is reassured because the revolutionists are still cautious and alert.

Like most Tunisians, Kawthar Al-Bashrawi wants a secular regime that separates between religion and state, and guarantees the freedom of expression and opinion for everyone. She clarifies that secular does not mean atheism as some would think, it does not contradict with religion or belief.

Help us improve this page:   Correct or update the Kawthar Al Bashrawi page