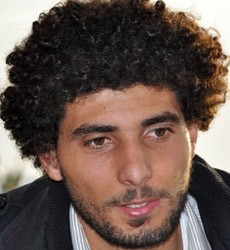 Kassem Istanbouli (aka Kasem Istambouli) comes from the South of Lebanon and was born to a Palestinian mother and a Lebanese father. He graduated from the Faculty of Fine Arts, Department of Theater, of the Lebanese University.

Despite his previous works, Kassem Istanbouli became famous in early 2011 for impersonating Muammar Al Gaddafi. He appeared as the Colonel himself in the streets of Beirut to take part in the protests, and also made numerous TV appearances. Zanka Zanka, a satirical comedy play inspired by his schizophrenic personality was presented on Babel Theater at the height of the revolution.

Kassem was also invited in July 2011 to present a theatrical dance work at the Festival de Teatro Clásico de Almagro Spain (ALMAGRO-OFF), making him the first Arab from the Middle East to participate in such an event. It includes a live traditional Arabic music performance and a presentation of a classical Arabic poem by the seventeenth century Mesopotamian author Hamad bin Hadi bin Hamad bin Ali Al-Jaber Al-Marri.

Kasem Istambouli has appeared in many other plays including :

Koum Yaba, a monodrama based on the Palestinian suffering (2011)

Nouzha Fi Midan Ma3raka, a play based on the work of Spanish writer Fernando Arabal, which tells the story of the Lebanese civil war. It was awarded best theatrical work in the second Festival of universities from the Ministry of Culture in 2009.

He also previously appeared in the sitcom Foyer Albert on Orange Television - OTV directed by Bruno Tabbal, a flop that only ran for one season.

Help us improve this page:   Correct or update the Kassem Istanbouli page