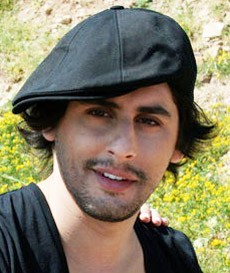 He still has a very restricted repertoire, but with his fresh summer hit single "Ayez Aghanny ", we know it won’t be long before he makes it to the top! JiJi is known for producing some of the most successful artists in the Arabic music industry, such as Nancy Ajram, and so far he has rarely gone wrong.

The song is quite catchy and works well with Kareem’s voice timbre. The sensual black and white music video of "Ayez Aghanny", shot at Bozcada in Turkey, features the sexy Brazilian model Catherine Vecchi in a summer holyday love affair with Kareem’s character. With the help of Director of Photography Sebastien Gonon, Leila Kanaan brilliantly captured the relaxed mood of nonchalance, typical of Mediterranean coastal cities. The bitter sweet style is somewhat evocative of the Italian neorealism cinema from the 40s. We did however notice a few familiar scenes, mainly the octopus sequence taken from a more recent perfume ad.

Overall it’s a very strong beginning! We impatiently await Wagdy’s next move…We actually had a little chat with him, and here is what he had to say…

So Kareem, how and why did you enter the music Industry? Is anyone else in your family an artist?

No, none of my relatives or family members are related to the Music Industry. It’s just that I have always loved singing ever since I was young, and everyone around me encouraged me to take the step. So I finally did.

Who are the creatives behind your hit single Ayez Aghanny?

Mohamed El Refaii wrote the Lyrics and composed the melody. The music arrangement was done by Ahmed Ibrahim.

It is a very nice song. We also really liked the video! This was your first experience in front of a camera; were you nervous?

Of course! I was nervous at the beginning, but gradually got accustomed to it. After all, I was very happy to be shooting with Leila Kanaan, a director that normally works with superstars!

Who chose the model? She is very pretty, and has beautiful Mediterranean features. But why didn't they cast an Arab model?

The whole concept was orchestrated by Leila and the staff working on the video. When they presented me with the girl and the idea, I just went along with it. I trust Leila, so I didn't interfere in that.

So is JiJi Lamara going to be your manager or is he just a friendly consultant?

Haha, JiJi lamara is a family friend actually. So I guess the answer is a friendly consultant. I can’t seem to take any decisions by myself! Jiji is helping me with everything and we pick the songs together.

We see. So are there any news songs on the way?

Yes, there is another single soon within two months. Then after that, hopefully the full debut album.

We are looking forward to it then. Thanks for the interview

Kareem Wagdy, also written Karim Wagdi, is an Arabic Pop singer from Egypt.
He was born on the 26th of September 1983 in Cairo, Egypt.
He studied in a French school (Les Jésuites), before entering AUC (American University of Cairo) to study Political Science.

Help us improve this page:   Correct or update the Kareem Wagdy page