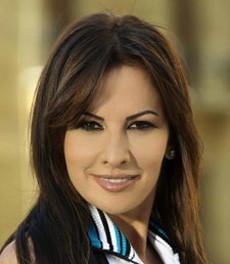 Her career in Television started in December 1993 with ART Channel, that broadcasted from Italy. She lived there for several years, and learnt to speak fluently the language. She would occasionally get invited to the sets of local TV channels, where the admirative cameramen would take close up shots of her pretty face.

On the 8th of October 2003, Joumana Bou Eid moved back to Lebanon to work for Rotana Television.

Joumana is also the editor in chief for the TV show Akher Al Akhbar, a famous daily music news program which airs on Rotana TV.

Help us improve this page:   Correct or update the Joumana Bou Eid page