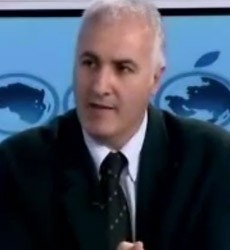 Jean Aziz is a Lebanese socio-political activist, a journalist, a university professor, and a TV talk show host.

Considered one of the brightest and most analytical journalists in Lebanon and the region, Jean Aziz was appointed news director of the Orange Television - OTV in 2007, a position which he exercised until his resignation in early 2011; He wanted to take a break off, and focus on his new political Talk Show Bayna al Soutour (on the same channel).

He also writes in many daily newspapers, including Al-Balad and Al-Akhbar.


Jean Aziz was originally a member of the Christian opposition in Qornet Chehwen and a former activist of the Lebanese Forces (he left the clan after a conflict with the leadership). He gradually found he had more in common with the grand aspirations of reform (social and political) represented by Michel Aoun and his supporters.

Jean Aziz also previously worked as a professor at the Saint Esprit University of Kaslik, and founded the Foundation for Human and Humanitarian Rights in 1989.

Help us improve this page:   Correct or update the Jean Aziz page