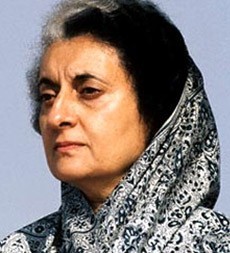 Indira Gandhi was the Prime Minister of the Republic of India for fifteen years. Her full name Indira Priyadarshiniis Gandhi.

Indira Gandhi was the first only female Prime Minister for India.

In the year 1999, Indira Gandhi was voted as the greatest woman of the past 1000 years during a special vote which was made by BBC. Her name came first and on top of great women such as Queen Elizabeth I of England, Marie Curie the famous scientist and Mother Teresa herself.

Help us improve this page:   Correct or update the Indira Gandhi page