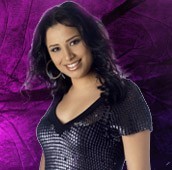 Iman Al Miri has a fun personality, he is full of engery and life. Iman Al Miri lost her mom when she was seven year old.

Help us improve this page:   Correct or update the Iman Al Miri page