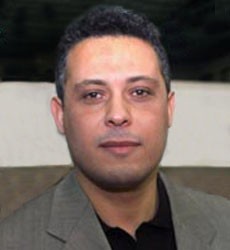 Imad Marmal is a Lebanese TV presenter and journalist.

Imad Marmal often regroups a large number of guests for his show Hadith el Sa3a, and is known to sacrifice air time for regular people (of all age groups) to discuss their points of views on soci-political matters of Lebanon and the Arab region. This is in addition to his regular one on one interviews or confrontational duo style debates. His style was later adopted by other more famous hosts such as Marcel Ghanem.

Imad Marmal believes that objectivity in the media is a relative issue, and that pragmatism and realism is the best alternative, especially when the political crisis gets aggravated , turning TVs radios and newspapers into a political platform to reflect one-sided views.

Help us improve this page:   Correct or update the Imad Marmal page