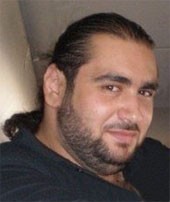 Imad Bazzi is a Lebanese blogger, journalist and internet activist. He mostly writes about Lebanese politics and society.

Imad Bazzi's Twitter name is TrellaLB. He co-founded the League of Lebanese Bloggers / CyberACT a non-profit organization that aims at empowering internet activists to bring along peaceful and democratic change.

Imad Bazzi is an Atheist and calls for the end of the sectarian regime in Lebanon.

Help us improve this page:   Correct or update the Imad Bazzi page