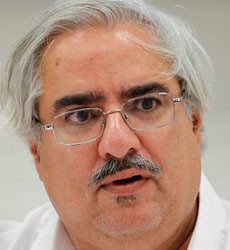 Ibrahim Sharif is a politician from Bahrain, head of the secular leftist party Waad.

Ibrahim Sharif was formerly associated with the underground leftist Popular Front for the Liberation of Bahrain and spent many years in exile.

Om March 17th 2011 following the Bahrain Protests, he was arrested and detained in a crackdown on opposition leaders along with Hassan Mushaima, Abdel Wahhab Hussein, and many more...and journalists like Lamees Dhaif.

Help us improve this page:   Correct or update the Ibrahim Sharif page