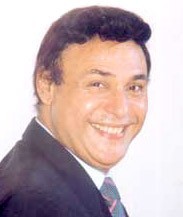 Ibrahim Maraashli work in television programs and plays span for over 30 years. He started his career in the sixties when he took roles in famous Lebanese and Egyptian movies. He then worked with the theater of Hassan Aladdin (Chocho) when he founded the National Theater.

In Television, Ibrahim Marashly was known for comedy roles with comedian and actress Ferial Karim and Hind Abi-Lamaa. His famous roles in Tv-series "Songs and meanings", "the teacher and the professor" and "Captain Bob" was the most devoted in the world of the small screen.

Help us improve this page:   Correct or update the Ibrahim Maraachli page