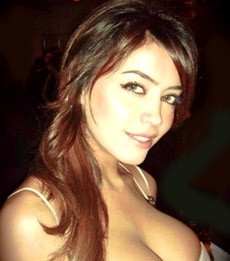 Hoda Fadel is a Lebanese model and TV host.

Employed under Nidal Bcherrawi Modeling Agency, Hoda has been modeling for many years now, appearing on various magazines, in advertisements and clips. Hoda has a sister Fida Fadel who is also a model.

In 2008, Hoda Fadel was one of the cute hosts of Ghazl El Banat (Candy Girls), a fun show that aired on Rotana Music TV.

In addition to modeling and dancing, Hoda Fadel loves yachting.

Hoda Fadel likes to give out a mischievous playful image, and has been known to indulge in all sorts of bad girl behavior. In 2009, both Hoda and Fida Fadel were taped dancing topless in the Black Rock Desert of Nevada at Burning Man '09 USA.

Help us improve this page:   Correct or update the Hoda Fadel page