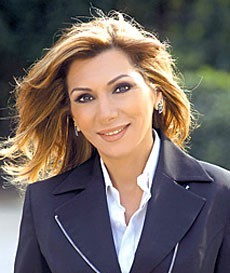 Hiyam Abou Chedid Hjeily also known as Hiyam Abu Chdid is one of the most recognizable television personalities in Lebanon and the Arab World.

Hiyam Abou Chedid started her career at the Murr Television - MTV Lebanon back in the 90s. Hiyam was very disappointed with the lack of solidarity and support that MTV received from its fellow media organizations before the station closure.

Hiyam Abou Chedid hosted the television talk show called JADAL on MTV for many years before the station closure.

Abu Chedid was so agry at what happened to MTV that she once said she could document the brutality which the MTV employees faced when they were sprayed with water by security forces during a sit-in in downtown Beirut a few days after the station was closed.

In the mid 2000, Hiyam came back to host some talk shows on satellite TV channels.

In 2011, Hiyam took a main role in the Lebanese TV series "Ayleh Matoub Alaya" which aired on MTV Lebanon. She played the role of a loving aunt who narrates the stories of her relatives while visiting a village near Beirut. The TV series cast included Michel Hourany, Nelly Maatouk and Yvonne El Hachem.